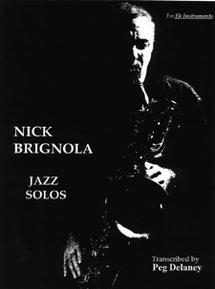 Nick died of cancer on February 8, 2002. He was 65. He was an internationally acclaimed baritone saxophone player and an accomplished performer on all reed instruments. He recorded over 50 albums both as a leader and guest artist. His albums as a leader include "This Is It" (1967), "Baritone Madness" (1977), "Burn Brigade" (1979), "Signals in From Somewhere" (1983), "Northern Lights" (1984), "Raincheck" (1989), "On a Different Level" (1990), "What It Takes" (1991), "It's Time!" (1993) and "Nick Brignola Live at Sweet Basil" (1993). His 1981 album "L.A. Bound" was nominated for a Grammy for Best Instrumental Jazz Group.
He was awarded the Best Jazz Instrumentalist on the BET Television Network for 1997-1998.
Nick won the December 1997 Jazz Times Magazine Critics Poll and was voted #1 Baritone Saxophonist in both The Down Beat and Jazz Times Magazines Readers Polls for the past 4 years. He performed and recorded with Chick Corea, Herbie Hancock, Clark Terry, Phil Woods, Woody Herman, Doc Severinsen, Chuck Mangione, Bob James, Elvin Jones, Dave Holland, Buddy Rich, Pat Metheny, Chet Baker, Dizzy Gillespie, Charles Mingus, Randy Brecker, Jack DeJohnette, Tom Harrell, Ted Curson and many others.

The name Nick Brignola has always been a household name. Nick was a Troy boy and always making news musically. When I wanted to know what improvisation was all about I started to transcribe Nick's sax solos. How better to learn than from the master and guy who'd been winning all the downbeat polls, plus it was like he was family -you know, him being from Troy. And what I learned from his solos! His time and intonation were perfect. I never had to guess at a note's pitch or time value. He was the living Bach who could spontaneously shoot out notes like bullets and weave lines that had such "hipness" and masculine force. I had never heard anyone play with such clarity in conception and such speed.
He was the embodiment of music. Everyone knew how well he played the reeds and some knew how well he played bass. I got a call from him a few years back because he was looking to buy a keyboard. He wanted one to hook up to his computer and do some composing with it. I thought to myself, "Look out piano players"!
The great thing about Nick was he always liked "the new". He had the first gadgets for his saxes: octave dividers, synthesizers that hooked up to his sax, chasers, emu's. And he always surrounded himself with the young vital players. He set the bar high for himself and inspired many of us to raise ours.

Please specify which version you want.

Questions? Feel free to email me at pegjazz1@gmail.com

This is a book of 7 solos by master saxophonist Nick Brignola and transcribed by Peg. Great for intermediate and advanced sight reading. Study Nick's solos for improvisational analysis.

Solos included are BLUE BOSSA, GENTLE RAIN, HESITATION BLUES, I HEAR A RHAPSODY, IN A MELLOW TONE, TUNE UP, and YES OR NO.